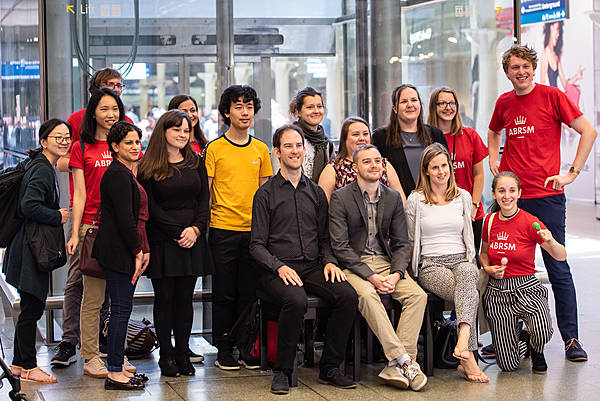 On Make Music Day, 21 June, ABRSM joined forces with St Pancras Station to bring some musical cheer to commuters.
Make Music Day is an annual celebration of music around the globe. Following ABRSM’s new Piano syllabus launch, ABRSM scholars, examiners and staff performed a specially commissioned piano medley containing 21 pieces from the new syllabus in front of thousands of commuters. The performance took place at midday at St Pancras Station and was streamed live on Facebook. 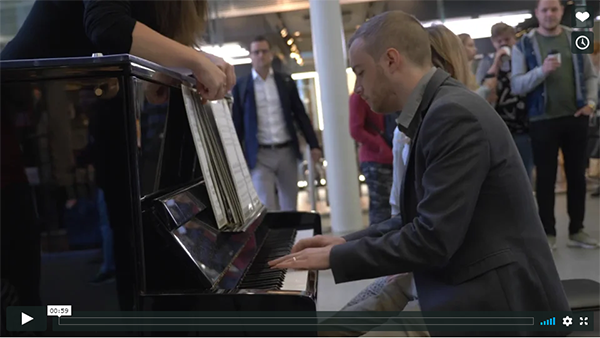 Watch a short snippet of the performance.

The piano medley was arranged by John Madden, ABRSM examiner and leading musician, who also opened the event. You can download the sheet music for the medley here – the full-length video will soon be available on our YouTube channel.
After the premiere performance (played on the station's famed 'Elton John Piano'), the public had an opportunity to explore the music for themselves on the piano.
Michael Elliott, ABRSM CEO, said: “ABRSM is committed to inspiring achievement in all kinds of music, and on this occasion in all kinds of places! Make Music Day is a powerful reminder of the power of music and its place in our everyday lives. We are delighted to be making a contribution through sharing some of the dynamic repertoire from our new Piano syllabus.”
Barbara Eifler, Making Music Chief Executive, said: “ABRSM’s piano relay in St Pancras Station was a perfect example of the imaginative events people came up with across the UK in this DIY festival, where anything musical goes!”
ABRSM is asking people from around the world to show their appreciation for Make Music Day by uploading a video of themselves performing one of the piano pieces from the medley (see the list below) to ABRSM’s social media channels – Instagram, YouTube, Twitter and Facebook – using #ABRSMPiano.
Everyone who uploads a video will be entered into a competition. The winner will be drawn randomly and will receive £50 worth of products from ABRSM’s online shop (or an equivalent amount in local currency).
Learn more about ABRSM's new Piano syllabus.
Download sheet music of the piano medley created for Make Music Day.
The medley contains the following pieces from ABRSM’s 2019 & 2020 Piano syllabus:
Minuet – Duncombe
Agincourt Song – Anon. (Engl 15th century)
Lullaby – Brahms arr. Nancy Litten
Musette in D – Anon.
Lesson in C – Anton Diabelli
Bransle de la Torche – Michael Praetorius
A Little Flower (Sea Pink) – Gurlitt
Blues in the Attic – Nikki Iles
Chanson de Matin – Elgar arr David Blackwell
A Kwela for Caitlin – Richard Michael
Minuet – John Loeillet arr Richard Jones
Film Noir – Mike Cornick
Fughetta in G – J. S. Bach
Scherzo in B♭ – Schubert
Passepied – Delibes
Song Without Words – Mendelssohn
Sarabande & Gigue – J. S. Bach
Allegro moderato – Schubert
Nocturne in G minor – Chopin
Voiles – Debussy
Lullaby – Raymond Yiu
Back to listing